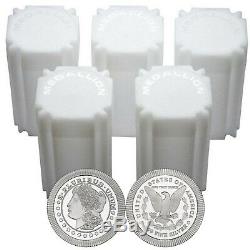 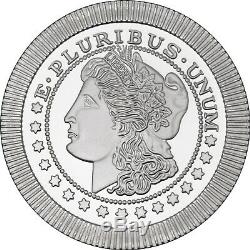 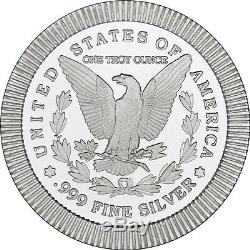 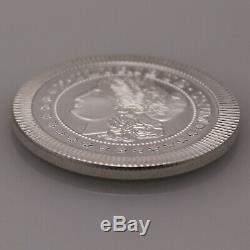 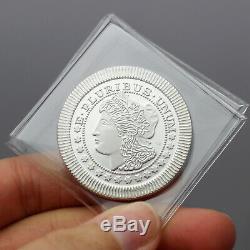 Morgan Dollar Stackables by SilverTowne 1oz. 999 Silver Rounds 100 Piece Lot. 999 Silver Medallion 100 Piece (pc) Total of 100 Troy Ounces of. Custom minted by the SilverTowne Mint located in Winchester, Indiana in One Troy Ounce of. 999 Fine Silver each; these rounds are based on the concept of easy stacking. Each 1 Ounce medallion, when stacked on top of one another, will easily interlock making your stacks stay in place rather than falling over! This feature makes these very easy and convenient to store. Another design in a series of stackable rounds released from the new SilverTowne Mint , following the formation of the Joint Venture between A-Mark Precious Metals and SilverTowne. We are excited about this stackable rim design that was first introduced by Silver Towne in 2015.

Following great responses from customers, and through partnership with the marketing team at A-Mark , we will be launching many more designs that will incorporate this unique stackable rim. The Morgan Dollar 1oz Stackable Medallion by SilverTowne was Officially Released at the 2017 FUN show! DESIGN: This impressive design boasts a proof-like finish background with the replica likeness of Lady Liberty that was featured on the official Morgan Dollar designed by George T. Morgan which was minted from 1878 through 1904 and then again in 1921 , on the obverse. This stackable round still has the mottos E PLURIBUS UNUM around the upper rim and LIBERTY appearing in Lady Liberty's head-dress; then instead of the date on the lower rim we've continued the stars all the way around.

Finally, the grooved rim, which make the rounds stackable , follow all the way around the edge making it a reeded edge. The reverse is again a commemoration of the original US Minted Morgan Dollar , features an Eagle, with an olive branch and three arrows in its talons, an open wreath and the motto UNITED STATES OF AMERICA ; then instead of In God We Trust , we've replaced that with the designation of ONE TROY OUNCE and instead of ONE DOLLAR , ours has the silver fineness designation of. Since 1949, SilverTowne has been your trusted source for silver bullion, gold bullion, modern coins, numismatics and more!! Founded in 1949 by Leon Hendrickson, SilverTowne is one of the country's largest and most respected dealers of rare coins, modern coins and precious metals. Leon and his beloved wife Ruhama prided themselves on building a company with a firm foundation of honesty and integrity.

Leon always believed a person could be trusted by a handshake. From a cigar box under a lunch counter to a multi-million dollar business, SilverTowne has grown from a small coin shop to large national dealer and silver bullion producing mint. Stay in Touch We are always adding more items, so watch our store for one of a kind items and great bullion deals. Offers will not be accepted unless the'Best Offer' tool is featured. Price listed will be the final price.

After your order is placed, we cannot change it. American Buffalo Bar by SilverTowne 10oz. 999 Fine Silver Bar 2 Piece Lot.

This listing is currently undergoing maintenance, we apologise for any inconvenience caused. The item "Morgan Dollar Stackables by SilverTowne 1oz. 999 Silver Rounds 100 Piece Lot" is in sale since Wednesday, February 1, 2017. This item is in the category "Coins & Paper Money\Bullion\Silver\Bars & Rounds". The seller is "silvertownelp" and is located in Winchester, Indiana.

This item can be shipped to United States, Canada, Bermuda, Mexico.