THE TRAP WITH THE GOLDEN BAIT From ROMAN BOOTENS, Morgan Dollar, 2 Pesos Gold 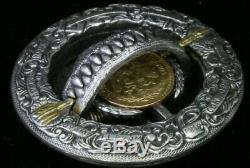 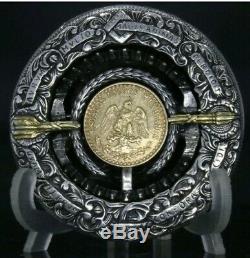 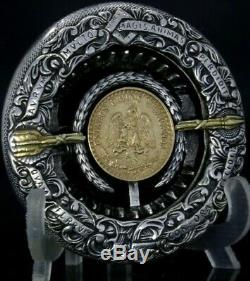 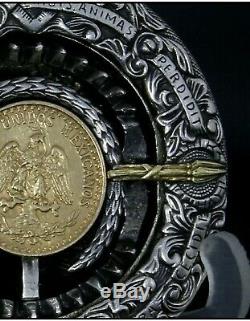 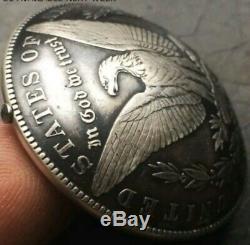 Limited to only 999 replicas. Individually laser-etched with serial number. Reproduction is 1:1 with the exception of the original has some tiny screws for assembly and this one uses high powered laser instead. Another point of interest is that we all the parts (jaws, mechanism, bezel) are in. Get ready to feast your eyes and your fingers on the most exciting bas-relief sculpture youve ever seen on a Hobo Nickel The Trap With the Golden Bait replica.

Within days, Booteen experienced an influx of requests from excited collectors wanting a piece of modern art history. Sadly, it was a limited edition of one, but it became an overnight icon. This stunning replica is unlike anything youve seen. The obverse is a domed Morgan Dollar, featuring the iconic eagle. But it is the reverse that is the real star. It features a 1945 Gold Dos Peso core, surrounded by a spring-loaded finger trap. With the trap open, it becomes part of the border work, but try to steal the gold bait and it snaps shut. Never before has a Hobo Nickel existed with such unique sculpting and functionality. Around the circumference, a matching inscription by Sir Walter Scott reads: AURUM MULTO MAGIS ANIMAS PERDIDIT QUAM FERRUM CORPORA CECIDIT.

Roman Booteens Trap Coin with the Golden Bait seems simple enough. Its a Morgan Dollar, domed to accommodate a spring-loaded bear-style trap mechanism, with an ornate carved bezel that holds the device together. Finally, seated atop the trap is a Dos Pesos 1/20oz gold coin. Each piece of the puzzle was specifically selected to tell the Trap Coins story.

The Morgan Dollar contrary to conventional hobo nickel carvings, Booteens preferred canvas is the obverse of the Morgan Dollar. While slightly harder and more difficult to carve than the traditional Indian head nickel, the larger surface affords more space for the Master to etch all that complex detailing weve come to know and love from Booteen. The Bezel while serving the purpose of holding the mechanism together, Booteen interwove plenty of symbols and tiny hidden details in the design. In the case of Roman Booteen, observing this rule is quite easy.

What Booteen did in a few weeks took an international team of experts nearly 18 months to reproduce. They sent the mechanism to engineers in Australia and Lichtenstein for evaluation. While the consensus was that replicating the design was possible, it wouldnt be easy on such a very small scale. Increasing the size of the model would be the only way to easily replicate the Trap Coin, but that was out of the question.

First, we wanted to make the replica as close to the original model as possible, and that meant using Morgans and Dos Pesos. Second, so much of the intrigue of Booteens coin is how very tiny it is, and the painstaking microscopic precision required to piece it together. 12 months and 40 computer-aided designs, 3d prints and prototype casts later, they finally had a working trap.

But the trap was nothing like the Booteens grizzly teeth. In fact, it was a dull mechanical knock-off, that lacked all signs of creativity. Thats where the digital artist & Zbrush genius Ghim Ong took up the task.

Once we knew we had a working set of jaws, Ghim carefully studied Romans original design, and modified the working trap 3d design, adding the life-like details found on the original. What Roman did in a few hours took weeks of design work to reproduce, and another several rounds of 3d prints and prototypes to test, tweak, and fit it all together. Once they had a designed & functioning trap, it was time to fit it all together. The next challenge was to design a doming die and block that would accommodate the trap while not leaving extra space for shifting or misalignment.

If the Morgan was domed too shallow, the device stick out the top. If it was domed too deep, wed run the risk of the trap not fitting inside the bowl. The item "THE TRAP WITH THE GOLDEN BAIT From ROMAN BOOTENS, Morgan Dollar, 2 Pesos Gold" is in sale since Saturday, January 25, 2020. This item is in the category "Coins & Paper Money\Coins\ US\Dollars\Morgan (1878-1921)".